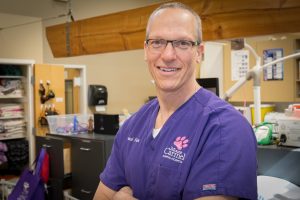 Why did you become a veterinarian?

My love of animals came early in life. Everything from “rescuing” a moth named “Poopsy”, to trying to kiss box turtles. But the real epiphany occurred at 12 years of age, when my own dog Rogue got into a fight with a neighborhood dog. I was home alone and had to care for his partially torn off ear.  When my parents arrived home, they called the veterinarian who was very impressed with the way the ear was wrapped. From then on it was a done deal in my mind: I was going to be veterinarian. My empathy for creatures that cannot speak for or take care of themselves has been a driving force in my life. I am truly a blessed individual to have found a job that I love so much.

Well-behaved pets increase the human animal bond exponentially. Commitment and consistency are the key. It doesn’t have to take much time, but a little training every day and with every interaction makes a big difference. Take a training class early, whether your pet is a puppy or an adult dog new to your home. For dogs and cats, play with their feet, play with their mouths, play with their ears – annoy them just a little. It will pay off in spades later in life.

Who makes up your family?

My wife Micki is a physical therapist. We are empty nesters and proud parents of two young men, Dylan and Liam. They are both in college and those years are going too fast.

The oldest furry member of our family is a cat named Kahuna, The Big Kahuna to be exact. He is a big orange tabby who has lived with us since 2001.

We also have two pit bulls, Ozro and Cooper who were BARCS rescues. They were both brought to MCAH a couple months apart for treatment of fractured rear legs. They were both scheduled to have their damaged legs amputated, but we decided to take them home with all their legs.

Fun fact about your pet?

Our dogs sleep in bed under the covers. There have been many a night where I have had to sleep on the couch because there was no room in the bed.

Positions: Doctors
This entry was posted on Tuesday, May 14th, 2019 at 8:55 pm. Both comments and pings are currently closed.