A Guide on Ehrlichiosis 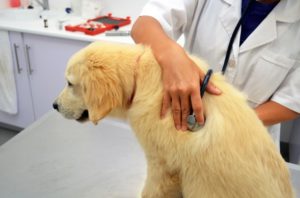 We care about your canine companion(s) and want them to live their best life.

Ehrlichiosis is a tick-borne disease that impacts dogs specifically. The Rhipicephalus sanguineous or brown dog tick carries this disease. Many Maryland pet parents are unaware that this tick-borne disease exists. Stay in the know and help us help you. We care about your canine companion(s) and want them to live their best life. One way to do so is by preventing parasites. Keep reading to learn more about Ehrlichiosis. We’re going to give you a guide.

When Did Ehrlichiosis First Gain Attention?

When military dogs returned from Vietnam in the 1970s, tests showed traces of this infection. This condition notably and severely infected German Shepherds and Doberman Pinschers. The rickettsial organism is the organism responsible for this disease. Rickettsiae are comparable to bacteria. Ehrlichia canis is one of the most prevalent rickettsial species found in dogs who have Ehrlichiosis, although other strains of organisms may be involved as well.

How is a Dog Infected?

When an infected tick bites a dog, Ehrlichiosis develops. Although the brown dog tick is pervasive throughout all of the United States and Canada, it is endemic in the southeastern and southwestern states of America. Maryland, being southeastern, means that you should be aware of this tick-borne disease.

What are the Symptoms?

During the acute stage, your dog may have a fever, swollen lymph nodes, trouble breathing, weight loss, or a bleeding disorder. Your dog may also seem unstable or have the possibility of developing meningitis. This stage typically lasts two to four weeks before either heading into the sub-clinical phase or before your dog eliminates the infection.

Your dog may get to the sub-clinical phase without you even being able to detect anything. Through blood samples, veterinarians can recognize that the tick-borne disease is present, but no outward signs will show. At this point, your dog will eliminate the organisms, or the disease will progress to the final stage.

If your dog is in the chronic, or clinical stage, their immune system will not be able to eliminate the organism, and symptoms will show. These symptoms include anemia, abnormal bleeding, a change in gait, and other symptoms. Hope is not lost, Maryland pet parents!

Ehrlichiosis is treatable with antibiotics in the acute and subclinical stages. If your dog reaches the chronic phase, blood transfusion and hospitalization may be required. Ehrlichiosis can be avoided with flea and tick preventatives like Bravecto, an oral medication that lasts 12 weeks. We veterinarians here at MCAH will take care of your canine companion.

Mount Carmel Animal Hospital has been serving the Northern Baltimore/Southern York community for over 30 years and is proud to be an independently operated, small animal practice committed to excellence in veterinary medicine and client service. From grooming to wellness services, along with Canine Life Skills Training Courses, and surgical procedures, we have the expertise that will best serve the needs of you and your pet. Contact us at 410-343-0200 and follow us on Facebook!

Categories: Parasite Prevention | Tags: Ehrlichiosis, Maryland, and tick-borne-disease
This entry was posted on Friday, October 25th, 2019 at 5:04 pm. Both comments and pings are currently closed.