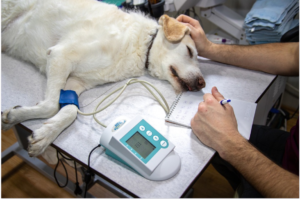 When diagnosing Addison’s disease, veterinarians use an ECG to monitor your dog’s heart rate.

Hypoadrenocorticism, or Addison’s disease, not to be confused with hyperadrenocorticism or Cushing’s disease (named after British physician Thomas Addison, who first discovered the illness), is a disease with severe and sometimes even life-threatening consequences for dogs if not appropriately managed. Addison’s disease occurs when the adrenal glands don’t produce enough hormones, particularly aldosterone and cortisol. These steroids play a significant role in regulating your canine companion’s internal organs and body systems. Damaged adrenal glands cause health complications. Here is a look at the signs of Addison’s disease and how our veterinarians diagnose it and treat it.

The Signs/Symptoms of Addison’s Disease

The broad range of symptoms associated with Addison’s Disease makes it hard to diagnose. The symptoms typically start out nonspecific and seem to come and go. If left untreated, your dog can go into what’s called an Addisonian crisis, which is life threatening. In general, a dog with Addison’s disease may experience:

Diagnosing Addison’s disease can be difficult due to the numerous symptoms. It even has the nickname “The Great Imitator”. Veterinarians are often presented with a patient with hypoadrenocorticism during an Addisonian crisis or acute stage. During this time, a dog might collapse or go through shock and need immediate hospitalization. Once the patient becomes stabilized, one of our experienced vets will run several tests to rule out other diseases or conditions. They will perform a blood test to get a complete blood count and biochemistry and run a urinalysis.

Anemia, abnormally high levels of potassium, urea in the blood, and changes in sodium, calcium, and chloride levels are indicative of Addison’s disease. A urinalysis, in particular, might reveal low concentrations of urine. An electrocardiogram (ECG) is also a valuable tool to check your canine companion’s heart rate and rhythm.

Addison’s diseases’ definitive test is the adrenocorticotropic hormone (ACTH) stimulation test. This test monitors how well the adrenal glands work by introducing the synthetic hormone ACTH into the body. Before and after the test, a vet will examine the levels of cortisol in the body.

Unfortunately, there isn’t a cure for hypoadrenocorticism, but it can be managed with medication. Your dog will have to take monthly replacement hormone medication administered through an injection. Throughout the rest of your dog’s life, a veterinarian will adjust the dosages as time goes on, particularly during times of stress. Your dog’s hormone levels and other blood values will also be monitored regularly for the rest of his or her life.

Categories: Blog | Tags: Addison’s disease, dog health, and hypoadrenocorticism
This entry was posted on Friday, September 17th, 2021 at 2:30 pm. Both comments and pings are currently closed.